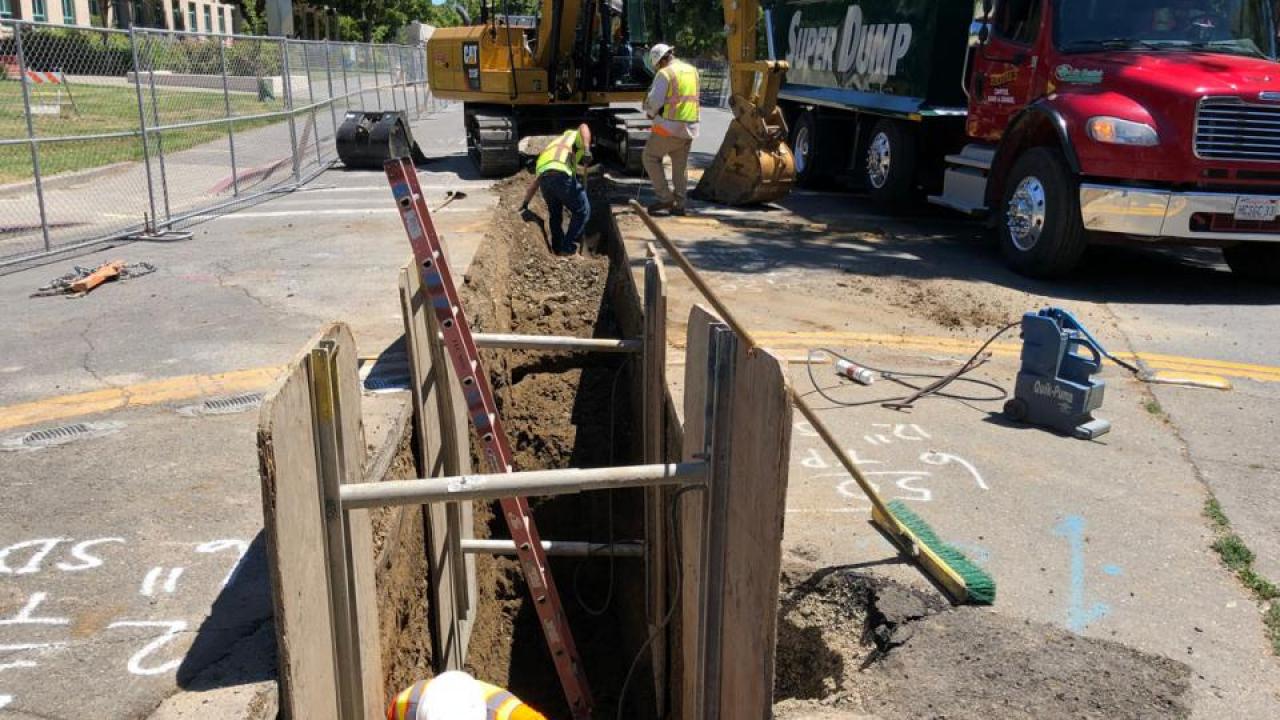 Steam Out, Hot Water In, to Heat Campus Buildings

Moving UC Davis toward a carbon-neutral future is kind of a big deal. And the construction project that is literally laying the groundwork to help the campus get there is big, too.

In fact, we call it the Big Shift — a multiyear project on the Davis campus to shift to a new source of energy to heat most campus buildings. Instead of using natural gas to make steam, the campus will use electricity to make hot water, which, like steam, will go through heat exchangers to heat the air that circulates in buildings.

Hot water, of course, requires less energy to make than steam. The campus will see additional energy savings, more than 25 percent, by abandoning its aging steam pipelines (some sections are 75 years old) in favor of new lines for hot water.

“The new energy system will not only replace an aging system in need of renewal with a much more efficient system,” said Josh Morejohn, a manager in Facilities Management, “but will also build us a pathway to carbon neutrality through the electrification of our heating system, which enables access to renewable energy sources.”

Converting to hot water for heating will reduce the university’s reliance on fossil fuels while immediately decreasing energy and water use — significant steps toward meeting the goal set by the UC Board of Regents for each campus to achieve net-zero carbon emissions by 2025.

Energy conservation interns explain the benefits of the new system.

The oldest steam pipelines are in the Quad District, which is where construction began this week with the closure of North Quad Avenue between California Avenue and East Quad Avenue. This part of the project, lasting until mid-August, is expected to be the most disruptive in the district, where pipeline work will continue over the next two years.

“There isn’t anyone on campus this project won’t involve, but we are doing our best to make sure impacts to research, student programs, events and other activities are minimal,” said Jim Carroll, university architect and associate chancellor, Design and Construction Management.

“Project managers started working with the specific programs affected by this construction in 2018, and will continue to communicate with them and the campus community as a whole as the project progresses,” he said.

The Quad District’s project cost of $55.2 million includes four miles of supply and return pipelines to connect 31 buildings comprising some 2.8 million square feet of space. Each building will get new heat exchangers to transfer the hot water's energy to the building's heating system, and to make hot water (the hot water that circulates underground stays underground, in a closed system).

See the Quad District construction map and schedule on the Big Shift website. It’s also where you can follow the project’s progress, learn more about energy use at UC Davis and see how you can personally contribute toward a more sustainable campus. While you’re there, sign up for the Big Shift e-newsletter.

The project also includes a large heat exchanger near Wickson Hall as a temporary step in the hot-water conversion project. This exchanger will turn steam from the existing system into hot water to circulate through the Quad District’s new pipelines, until subsequent construction delivers hot water directly from the Central Heating and Cooling Plant.

The scope of the project means there will be disruption to highly trafficked areas throughout central campus starting this summer. The biggest impact will be the closure of the North Quad through August 14. Fencing and detour signage is up, and three construction crews are underway, trenching and laying pipe, and preparing to install the new heat exchanger.

A leader in sustainability

Knowing that UC Davis’ steam system was at the end of its maintainable life cycle, the project planning team carefully analyzed several scenarios for this major project, with an eye on the full spectrum of expenses, for any version of a renewed heating system.

As the nation’s No. 1 university for sustainability (UI GreenMetric World University Rankings, 2017, ’18 and ’19), the analysis of course included the social cost of carbon.

The careful, independent study demonstrated that the wisest choice fiscally was to move from steam to low-temperature hot water, which is expected to save the campus significant expenses in fuel, water and maintenance costs over the project’s lifespan.

Although net-zero carbon emission is the goal, achieving it with a campus as large as UC Davis will take time. This project aims to switch the majority of large buildings on campus from steam to hot water heating. By doing so, UC Davis could reduce its overall campus carbon emissions by 40 percent.

“The Big Shift is a decade in the making, since the creation of the 2010 UC Davis Climate Action Plan,” said Camille Kirk, director of sustainability and campus sustainability planner. “Seeing it come to fruition and knowing the impact it will have in reducing our energy consumption and carbon footprint is incredibly rewarding, and is a real testament to the value of ambitious planning and collaborative work across campus.”

Bring in the Reinforcements